Leominster, MA –Leominster Credit Union is proud to announce the following employees have been recently promoted within the organization.

Nicole Legere has been promoted to Vice President Compliance Officer. Nicole was hired in October 2015 as the Compliance Officer and then promoted AVP Compliance Officer in December 2016. She has made significant contributions to the Credit Union through her management of the Compliance Program, Vendor Management Program, Fraud Management, Bank Secrecy Program, and Internal Audit Program. Nicole earned a bachelor’s degree in Political Science & Government from the University  of Massachusetts at Amherst and her Juris Doctor from Roger Williams University School of Law. She has been admitted to both the Massachusetts and New York Bar.

Andrew Leblanc has been promoted to Assistant Vice President Information Security Officer. Andrew joined LCU in April 2018 as the IT Risk Manager. As the Credit Union’s subject matter expert on cybersecurity, information security, and data privacy, he has made excellent contributions to LCU in these areas Andrew holds  an AS in Computer Systems Networking and Telecommunications from ITT Technical Institute, a BS in Information Technology from Northeastern University, and an MBA in Management and Operations from Fitchburg State University.

Holly Ogden has been promoted to Assistant Vice President Mortgages. Holly joined LCU in February 2020 as the Mortgage Pipeline Manager. With 25 years’ experience in the industry, Holly has proven to be an asset to the Mortgage Team and to the Credit Union. Her level of knowledge has significantly improved processes and workflows in her department. Under Holly’s leadership and coaching, her team exceeded production goals in 2020 and 2021. Holly earned a BA in English from Massachusetts College of Liberal Arts.

Danielle Duval has been promoted to Assistant Vice President Collections. Danielle has been with LCU since August 2019 as the Collections Manager. Danielle attended Sacred Heart University and has over 15 years of experience in Commercial Lending and Collections. Danielle has consistently performed at a high level while demonstrating her strong knowledge in the area of collections, collection laws, repossessions, foreclosures and loan modifications. She has proven to be very committed to her  role and to developing and training her team.

Justin Silva has been promoted to Assistant Vice President Retail Administrator. Justin has been with LCU for 22 years and holds an ASBA in Management from New England College of Business. He originally joined LCU as an intern from Worcester Vocational High School and was then hired to work at the West Boylston Street Branch as a Teller. During his tenure, he progressed through a variety of roles in the branch network up to Assistant Branch Manager and was promoted Retail Administrator in 2008. His experience and knowledge in branch operations, retail systems and member service are invaluable.

Maila Berry has been promoted to Assistant Vice President Operations. Maila has been with LCU for 25 years. She spent the first half of her career in Retail progressing through a variety of branch roles up to Branch Manager.

Nichole holds a BA in History from Merrimack College and has a strong management background from another industry. Under Nichole’s leadership, her department has grown significantly with the expansion of the digital services area as well as the addition of business services. Nichole is very committed to Leominster Credit Union, her team and our members.

Arden Twining has been promoted to Assistant Vice President Learning & Development. Arden joined LCU in 2015 as the Training Specialist and was promoted to Training Manager in 2016.  She brings over 20 years of experience in the training and learning and development arena from a variety of industries. Arden attended the University of Massachusetts at Amherst and is currently completing a bachelor’s degree from St. Joseph’s College in Adult Education and Training. Arden brings a unique skill set in designing, developing, and writing training programs.

Josh Laprade has been promoted to IT Manager. Josh joined LCU in 2017 as an IT Analyst. He was promoted to IT Systems Admin II in 2019, and then to IT Team Lead 2021. Josh holds an AS in Computer Network and Service Technology and a BS in Computer Information Systems from New England Institute of Technology. Josh has made significant contributions to the Credit Union’s IT Team and is extremely dedicated to his role. He is  consistently looking to improve technology and efficiencies across the Credit Union.

Effective Monday, February 7, 2022, all branch locations will resume normal lobby and drive-up hours.  For your health and safety, masks must be worn in all of our branches as well as our Headquarters building as we continue with the Mask Mandate as advised by the Department of Public Health.  We look forward to seeing you and thank you for your patience and continued support.

LCU’s Shred-A-Thon is a free event open to the public.  Each year LCU partners with Habitat for Humanity, and participants may make a donation to the organization.  The event was held at LCU’s North Leominster branch where many members and non-members stopped by to have their sensitive documents shred on site by the secure shredding service, New England Security Shredders.

“This was our most successful Shred-A-Thon to date,” commented Barbara Mahoney, President and CEO.   “We were pleased to be able to hold the event this year, where due to COVID had to postpone the events last year and this past spring.  LCU’s semi-annual Shred-A-Thons are a great community event and assist in preventing identity theft, by offering a secure venue to shred confidential documents. The generous donations collected went to a great organization, Habitat for Humanity.”

Update 11/17/2021: In the afternoon of Wednesday, November 17th our website will be getting a refreshed new look!* The Online Banking Login box will move to the right side of the webpage (as displayed below) where you will need to click on it to expand the box in order to put in your username and password.

As always, our website will continue to keep you up-to-date on products, promotions, important information, events and more!

We are excited for our updated, modern and easy to navigate website – we hope you are too! If you have any questions, please contact us at 800-649-4646.

*Please note you may experience some brief intermittent disruption during the initial refresh and we thank you in advance for your patience. 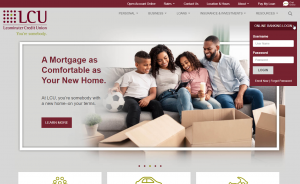 Leominster Credit Union (LCU) presented a check for $5,000 to Fathering Fathers, Inc., a non-profit mentoring organization, dedicated to raising up healthy, confident, and well-prepared young men. The lion’s share of this donation will go to help jump start a girl’s mentoring program based out of Clinton Middle School and Tahanto Regional, in Clinton and Boylston, Massachusetts respectively.

“We are deeply grateful for the contribution that this gift provides to develop and implement our programs. We are confident the young men and women in our mentoring groups will directly benefit from this donation and their lives will be impacted in a tangible, positive way. Our desire for this program is that the students we mentor will grow up better equipped to navigate the challenging world we live in. That goal is much closer thanks to the generosity of Leominster Credit Union,” stated Nate Rollins, Chairman of the Board of Fathering Fathers.

“We are proud to contribute to the Fathering Fathers organization in order to help the mentors and volunteers involved in the program to better support, educate and provide leadership and resources for the youth in our community. We feel that this is a very important initiative and will make a great difference in the lives of everyone involved,” stated Barbara Mahoney, President and CEO, Leominster Credit Union.

For more details on Fathering Fathers, Inc., how to become a mentor or mentee, or to donate to the program, please visit www.fatheringfathers.com.

In response to the growing number of COVID-19 cases mainly due to the Delta Variant, both the Center for Disease Control and Prevention (CDC) and the State of Massachusetts have revised their guidance regarding masks.  This is being done to maximize individuals’ protection and to help prevent the spread of the virus to others.   The CDC now recommends all individuals – both fully vaccinated and unvaccinated to wear masks indoors in geographic locations where there is substantial community spread. Worcester County is now categorized as having a substantial transmission rate.  As of July 30th, the State is advising fully vaccinated individuals to wear a mask indoors if they have a weakened immune system or are at an increased risk due to an underlying medical condition or age.  As the health and safety of our members and employees remains our number one priority, Leominster Credit Union strongly encourages members and employees to follow this new guidance, especially when you are not able to socially distance.

We always welcome you into our branches, but please remember that we also offer 24/7 Online and Mobile Banking, Automated Telephone Banking (MEL) and ATMs. You can utilize online banking and the LCU Mobile App to check balances, make payments, transfer funds, or deposit checks. If you haven’t enrolled in Online and Mobile Banking, we encourage you to do so. Please call our Member Service Center at 800-649-4646 who will be happy to assist with the enrollment process.

We ask that everyone, vaccinated or unvaccinated to remember to be kind, patient and respectful as we continue to navigate through the unknown.  We will continue to do our part to keep both our members and employees safe and we thank you for your continued loyalty.

Use this auto loan calculator to find your payment.

The payment is estimated and may not
include all fees/charges.

The payment is estimated and may not
include all fees/charges.

Determine the compound interest gained on a CD.